“The Team vs Bucky” Clip: 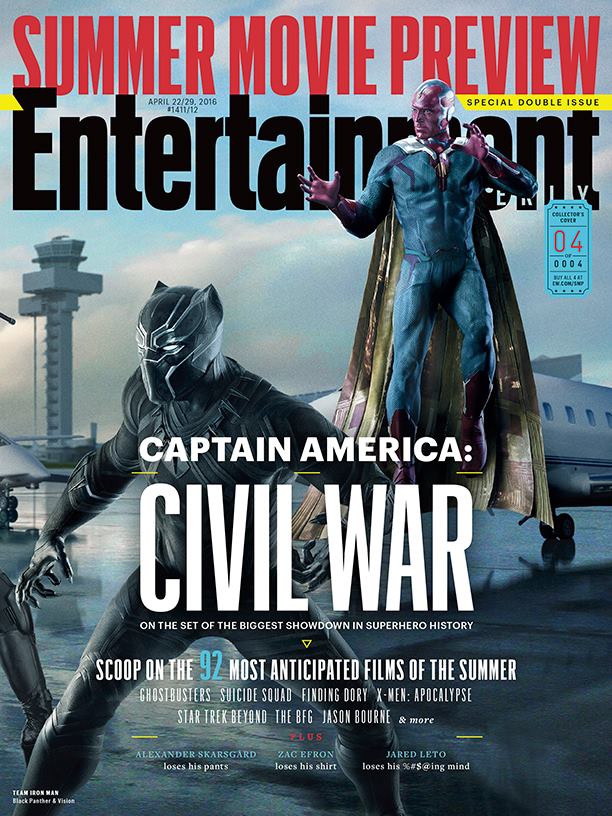 Here, the current members of the new Avengers squad – from left: War Machine, Black Widow, Cap, Falcon, Vision, and Scarlet Witch – are forced to confront the casualty count and damage estimates from past missions. Tony Stark, who is funding their operation, watches on from the background. “It’s super important to us that you have a very difficult time choosing who you’re rooting for,” says Joe Russo, who directed the movie with his brother, Anthony. “It doesn’t break down very cleanly in the movie. There’s a theme of brotherhood and rivalry between Cap and Tony that goes to some very complicated places.” Anthony adds: “Let’s just say that metaphor is a very vivid one for us.”

Anthony Mackie says there was no question which side Falcon would come down on. He’s #TeamCap all the way. Not that Falcon (a.k.a. Sam Wilson) understands Steve Rogers’ connection to The Winter Soldier. “He’s like, look, dude, we need to leave him alone,'” Mackie says. “But with Steve, that relationship is so deep and Steve is such a loyal guy from their history, their past, and their bond and kinship, that Steve sees more. But I think with Sam, it’s pretty much, ‘Keep him over there and I’m over here.'”

As T’Challa, the prince of the secretive, technologically advanced African nation of Wakanda, Chadwick Boseman looks like a man in charge no matter which suit he’s wearing – civilian or the vibranium-woven uniform of the Black Panther. He’s on #TeamIronMan, supporting restrictions on the powerful (even though he’s breaking a lot of those rules to get revenge on The Winter Soldier for a crime against his family.) “He comes into it because, as a world leader, there is a need to make sure there is some sort of control over these superpowers,” Boseman says. “It’s like if there were nuclear weapons, the world leaders would come together at the U.N. and decide who should have them. It’s the same thing with superheroes. He has an interest in making sure this power doesn’t go without some restraints and control and some limitations.”

As Helmut Zemo, Daniel Brühl is a mysterious, manipulative figure who is positioning the heroes against each other. Why? We know, but can’t say. It’s too much of a spoiler. This character is a significant variation on the cackling, purple-masked Baron Zemo from the Marvel Comics, who led a group that called itself the Masters of Evil. (No mystery about their intentions there.) “He’s still similar to what you know of Zemo, a revenge character,” Joe Russo says.

Marvel’s “Captain America: Civil War” finds Steve Rogers leading the newly formed team of Avengers in their continued efforts to safeguard humanity. But after another incident involving the Avengers results in collateral damage, political pressure mounts to install a system of accountability, headed by a governing body to oversee and direct the team. The new status quo fractures the Avengers, resulting in two camps—one led by Steve Rogers and his desire for the Avengers to remain free to defend humanity without government interference, and the other following Tony Stark’s surprising decision to support government oversight and accountability.

Directed by Joe & Anthony Russo from a script by Christopher Markus and Stephen McFeely.