I don’t think I ever thought I’d agree with that part of the line from one of my favorite musicals, RENT, until I had a chance to visit NYC myself.

(all photos by CC)

I have been to NYC a grand total of two times.

The first trip was a spontaneous endeavor by friends of mine and myself about 10 years ago when we were at a music festival in PA.

On the Saturday of that festival while waiting on a shuttle back to our hotel, we met a very friendly, laid back, hippy type of guy who, after a long conversation, told us he’d be happy to show us around the city if we wanted to take him along with us.

I’m not even sure we thought twice about it. He met us at the shuttle stop the next day and away we went.

I suffered from a lot of (at the time) unexplained anxiety so I know that we went through the Lincoln Tunnel on our way in but I didn’t see anything because my head was down in my lap. It wasn’t my friend’s driving I didn’t trust, mind you, just a feeling I had.

We pulled up to Times Square around 11am on Sunday and found a parking space (I was not expecting that). As cool as it was to see everything, I think I missed the crowd of people I expected.

From there we went by Ground Zero. I will never forget the feeling in the air around that space even years after the 9/11 tragedy. Very POWERFUL.

We were only there for the day but before we headed out, we took a ferry ride through the Hudson and got a glimpse of the Statue of Liberty and Ellis Island.

The trip was a whirlwind and my anxiety made it a little difficult to fully enjoy it (I wouldn’t go to the top of the Empire State Building) BUT it gave me a taste of something I’d never experienced before and I knew I’d be back.

My second trip to NYC was very, very different. With the help of my family, friends and therapy, my anxiety no longer plagued me like it use to SO when the opportunity came for GiGi and I to go to the city to cover NYCC, I was more than ready for it!

It was this past October when we flew in to Laguardia and I had my face plastered to the window of the plane. I couldn’t wait to see it, The City. I remember smiling like the Cheshire Cat as the plane approached the landing and I could make out landmarks now made even more famous by favorite movies and shows. Yeah, I was ready.

My first Uber ride EVER happened on this trip. A very nice (and handsome) guy named Michael, from Queens, picked us and proceeded on the quickest route to our hotel on 37th about a few blocks up from the Jacob Javits Center. By knowing the city and taking said fastest route, we drove through places I didn’t expect to see. I embarrassed myself more than once by all the OOOHHH and AHHHing I did, along with staring out my window, quite fascinated, at people who really didn’t like me staring at them…I wasn’t in NC anymore!

I don’t think I stopped smiling from the moment we landed until we reached our rooms. It’s a very good thing that the hotel staff was STELLAR because my enthusiasm wasn’t going anywhere.

Much to my delight, GiGi had our afternoon planned. She’s a city girl and knew NYC very well, so no sooner than we had unpacked, we were out the door again, destination EVERYWHERE. We couldn’t really walk everywhere BUT what did I know.

From the time we hit the first intersection and Supergirl looked down at me from her giant billboard, I knew that I was in for a thrilling experience.

We started walking and didn’t stop until the sun went down, and, even longer.

With just a twinge of anxiety, I let GiGi lead us up and over to Times Square, down and around to every stage we could find, up again to Radio City Music Hall and on to the Rockefeller Center.

Then we walked down (or up) Avenue of the Americas until we reached Central Park. By the time we reached Central Park I was so exhilarated I could barely stand myself. Hours of walking had gotten me use to the sounds and smells, but not quite the sights.

I marveled at all of the languages I heard as we wove through people, at the amount of honking horns you could hear at one time, at the people in heeled shoes passing us briskly, the street merchandise vendors, the street food vendors, the panhandlers, and the reflection of sunlight off the helmets of cyclists commuting home.

Once we acquired a map of the park and rounded one of the many winds of the trail, I turned to look back for a minute and saw this… From this spot, you can see the city but you can’t hear it…maybe the hum of collective cars running and the occasional horn honk BUT nothing like walking it’s streets. Here is where the magic of the city really hit me. Those buildings are so majestic beyond the silhouette of the trees. I looked back I don’t know how many times and said “this is perfect”.

As we made our way through the park, I began to imagine how the residents of this fine city might get a little sanity now and then. Hundreds of people ran through the park as the sun went down and still more cycled through. This place was like the fresh air of this city. The place where you can get some space, some greenery, some earth under your feet.

Between the electricity of the walk through the city and the stroll through the park, I got a clear picture of making this place home. 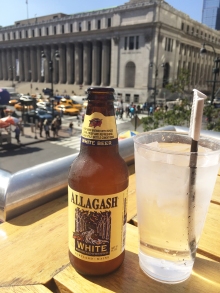 The next four days were filled with the New York Comic Con (which has it’s own posts) and very tasty food, when we could stop for it.

I believe we had Cuban, Chinese, New York Pizza, Irish Fare and a burger before it was all said and done.

On our last day in NYC, we had an afternoon flight, so we got up early and went on one more walk.

This time GiGi took me up Park Ave, all the way to the Empire State Building. I am not the shopper that a lot people are BUT it was still incredible to see the beautiful architecture of the older buildings. Macy’s was one of my favorites!

Seeing a 360 degree view of NYC is truly something to behold. 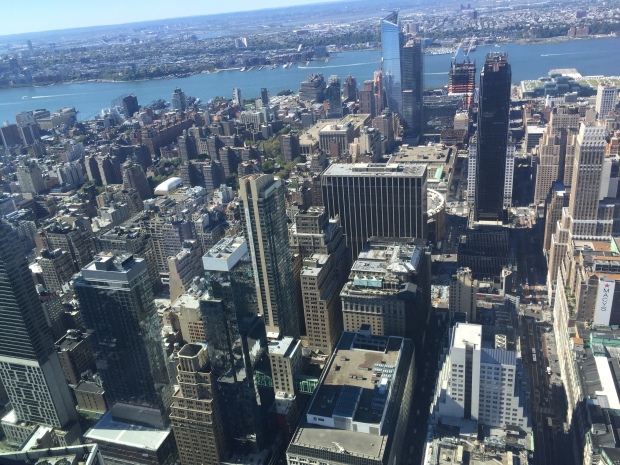 On most trips, by about the end, I am ready come home. I can tell you this about NYC, I was NOT ready to come home.

It’s very true what they say about the energy of the place. It pumps you up and makes you spin. I barely got a taste of it yet I felt like I could do anything.

Maybe it was the basic newness of it all…but I think The City really is something special.

3 thoughts on “The Bradshaw Challenge: The City”