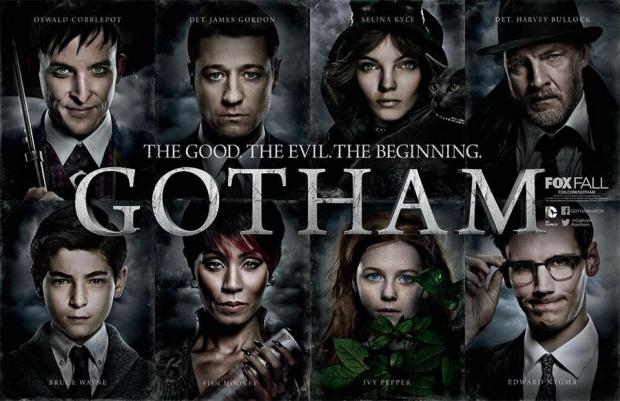 Detective James Gordon works out the details of the Wayne murder investigation with Barbara Kean.

Fish Mooney and her right hand, Oswald Cobblepot, offer their own personal brand of discipline in the streets of Gotham.

Desperate to put the pieces of the puzzle of the murders of Thomas and Martha Wayne together, detective questions mob baroness Fish Mooney.

There Will Be Light, Bruce:

Do The Right Thing For Once:

Renee Montoya and Crispus Allen of Gotham’s Major Crimes Unit ask to take on the Wayne murder investigation from Detectives Bullock and Gordon.

Everyone knows the name Commissioner Gordon. He is one of the crime world’s greatest foes, a man whose reputation is synonymous with law and order. But what is known of Gordon’s story and his rise from rookie detective to Police Commissioner? What did it take to navigate the multiple layers of corruption that secretly ruled Gotham City, the spawning ground of the world’s most iconic villains? And what circumstances created them – the larger-than-life personas who would become Catwoman, The Penguin, The Riddler, Two-Face and The Joker?

GOTHAM is an origin story of the great DC Comics super villains and vigilantes, revealing an entirely new chapter that has never been told. From executive producer/writer Bruno Heller (“The Mentalist,” “Rome”), GOTHAM follows one cop’s rise through a dangerously corrupt city teetering on the edge of evil and chronicles the birth of one of the most popular super heroes of our time.