Epic Art Prints are proud to release on October the 3rd, ALICE’S ADVENTURES IN WONDERLAND by Mads Berg, created to celebrate the 150th Anniversary of the masterpiece written by Lewis Carroll. 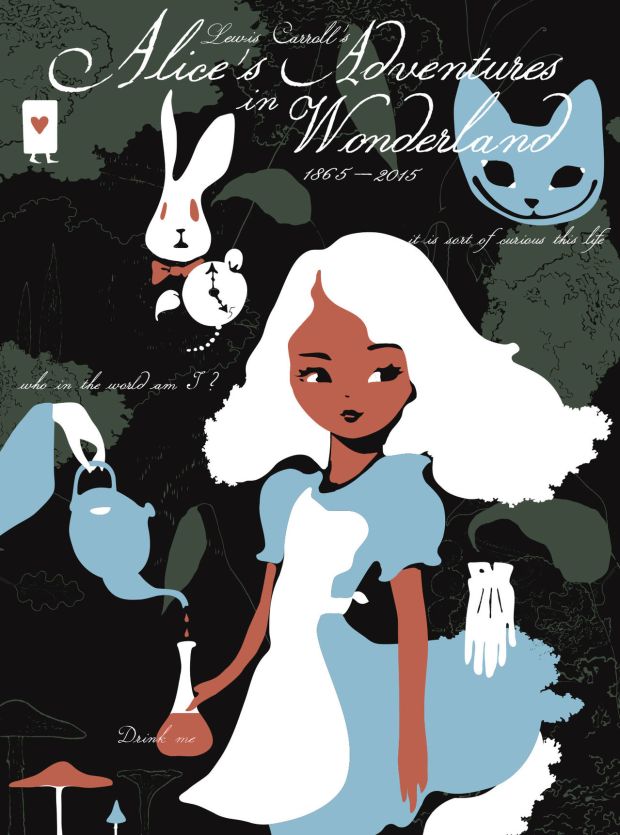 Here is what Mads had to say about the poster:

I wanted to create a poster, that hits the mysterious and surrealistic aspects of the famous novel, but at the same time has the attraction of a piece of art that you would hang on the wall in children’s room. The link to the actual book, the famous piece of literature, is important, and that is why the quotations are incorporated into the poster. Also, to set this apart from Disney’s Alice, and more aligned with the novel, the colours are sombre and loaded with contrast. In the book I particularly love the way the characters enter the stage from out of nowhere, so I wanted to create this weird scene where the actors appear randomly in a dark and mushroom infused universe with no logic interaction. Not of this world, but definitely humorous and spirited.

Mads Berg designs illustrations to an international range of clients. His main fields of illustration are Posters, Brand Illustrations, Key Visuals, Editorial Illustrations, Cover Art, Murals. The illustrations are characterized by a style which translates classic poster art into a modern and timeless look. Mads graduated from the Danish Design School in 2001, and since then, he has been working independently as an illustrator. Occasionally working as a lecturer at design schools. Several times member of the jury, awarding the best in Swedish and Norwegian Contemporary Illustration. In 2010 he won the “Best Danish Children’s Comic” prize and in 2009 he won the Danish Design Prize. Mads’ poster art is represented at the Danish National Design Archives at the Design Museum. Mads also designs park maps for world famous amusement parks.