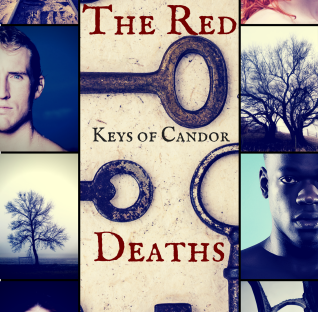 Greetings gals and guys!! I finished BOOK SEVEN just moments ago and I wanted to write while everything was fresh on my mind… 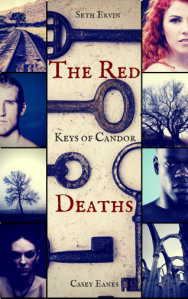 W O W! I consider myself very fortunate to have happened upon this piece of greatness! Seth Ervin and Casey Eanes have laid the perfect foundation for an entire series with The Red Deaths.

The Kingdom of Candor

Preost-home of the religious order

Riht- the dead zone (made so by the Grogans)

King Camden is dead. His head of security, Grift, has been taken captive. His diabolical son Seam has taken his place on the throne. Cities are in ruin as war begins to wage between Lotte and the Grogan Lands.

**Kull, hell bent to find his father and kill his captor Willyn Kara, sets out on the trecherous journey to the Grogan lands accompanied by Wael, the Mastermonk from Preost.

**Willyn Kara, convinced her brother Hagan (ruler of the Grogans) has been poisoned by Grift Shepard, plows through Lotte, leaving a trail of destruction, in order to capture, question and eventually kill Grift Shepard.

**Seam Panderean has one goal…to rule all…but he will need all the Keys of Candor to do it and for him, that means stoking the fires of war and enslaving his kingdom.

What follows is a high intensity tale filled with loads of action, suspense, magic and a bit of sadness. The landscape of Candor is easily to visualize and the characters are FULL of life and vibrancy. I enjoy the way in which the writers used each chapter to start you on multiple, individual, roads that inevitability end at the same place. The progression of the story was very well paced and the ending was done in such a way that while there was a completion to what you read, you are left wanting MORE…which I honestly PRAY happens.

Keys of Candor: The Red Death is an incredible start to what I believe will be an exceptional series. I highly recommend to any reader who enjoys a great epic fantasy.

Pick up your copy here:

And then go show Seth and Casey some love!!

Happy Reading and may Aleph bless you!