In our second HeroesCon interview we took a few minuets (ok, WAY more than a few) to chat with Michigan based illustrator/cartoonist/pinup artist Leslie Gauthier.

From first glance, Leslie’s convention booth was vibrant, bright and captivating! Very much like her personality!

Full transparency here…In chatting with these amazing creative types, I often forget to “officially” begin the interview (as I am often working through a bit of nerves) and somewhere between the first and third casual question, GiGi slides the recorder in and we are in business.

Luckily for this post, Leslie and I did just fine, or at least I think we did 😉

Leslie, partly, got her start in the craft field working with felt and creating felt taxidermy animals for customers…

WGG: So where you doing the crafting before the illustration?

LG: No, always an illustrator first. I actually started out doing whales and things that can’t actually be taxidermed due to the nature of their skin but anyway, yeah, I have been an illustrator from the time I could hold a crayon and thought I wanted to be an animator for a hot minute and I went to a comic con to volunteer with a friend one time when I was 16 year old and I met these amazing illustrators, they explained their job to me and they were going to school where I was thinking of applying to…and I was like “I really want to go into the animation program” and I was just hanging with these men all weekend and they were amazing…Chip Zdarksy who writes Sex Criminals like, YEAH, but when I knew him he was writing this beautiful book called Prison Funnies and it was like this amazing thing. I met him at Motor City Comic Con…I looked through their sketchbooks, they looked through mine and then wrote me letters of recommendation and I was like, YEAH, I want to be an illustrator. I want to create my own, unique pieces…I don’t want to be a cog in a machine doing someone else’s style…and they were like “yeah, go to the school that we went to” and that was basically that. I’ve been doing comic cons professionally since I was 18 and that’s about 20 years…which can make me a little jaded at times 😉

LG: There was this convention started by Tony Moore and bunch of other really beautiful people, called Cinci Comic Con…It was something different because this was the first show that I had been to that was almost all artists, very akin to HeroesCon and it was something new I wanted to try that was a little closer to the MidWest people…That was probably one of my best convention experiences and that was much later in my con going life. It was really cool for them to table me, who was lesser known, beside someone like Ben Templesmith, because they liked my art and wanted everyone’s art to be able to be found. Those kind of connections matter and keep me going. The only reason I am at this con is because I met people at CinciCon and once that one stopped, it became clear that HeroesCon was the most like CinciCon and I had to come and try it.

WGG: Are you having a good experience at HeroesCon

LG: Oh, it’s been an amazing time. The male pin ups and the body positive work, it’s really taken off  and to come to convention like this and have it so well received, so many people coming by and thanking me for being here…it’s like being a part of a community. It’s been a really great experience!

WGG: Sorry, I am getting emotional? (CC)

LG: Please, I get emotional at the drop of a hat 🙂

WGG: So, do you have a favorite male pin up? Is that a hard question to answer?

LG: It IS really hard and I tell people that I do love them all BUT I do have my favorites…The guy on the stuff crust pizza is the guy that started it all so I always have a soft spot for him…and my other favorite is new, it’s Franco on the fruit and he is my first male Trans model. I think that representation is important and I am always looking for ways to be more representative in my art. 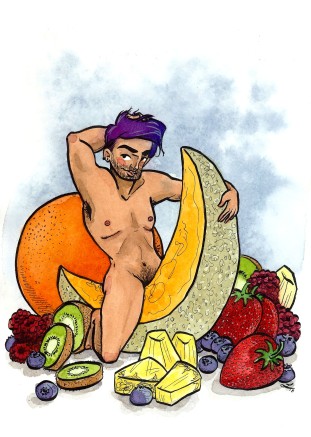 WGG: So they all have names?

LG: They do all have names and if they are alliterative to the food in the print then it’s a name I made up in my head, if it’s someone like “Pizza Dave” then it’s my friend Dave’s name.

WGG: Is it his likeness?

LG: Oh YEAH, whenever I get permission to do likenesses (and they are all consenting adults, believe me…it’s nothing weird or cheeky, because I respect them), I always use their names. I just kinda love that for the last 4 years, I’ve been selling prints of my friend Dave naked 🙂

WGG: That’s awesome…Can you tell us a little bit about these Rad Ladies?

LG: Yeah, SURE! Rad ladies is a series I started because as an illustrator, you want to show your breadth of work and I wanted to represent women in a bit of different way. You see a lot of pin up art and as empowering as that can be for women, it’s been really nice to do something subtle, so rad ladies (or I call them My Independent Women series) is a bunch of women being comfortable in solitude, alone but not lonely…just doing a lot of great things ladies do.

WGG: And do you have a favorite of those?

LG: I really do have to say it’s my coffee girl. It’s my favorite thing to do sitting in a friend’s nice kitchen (because mine is really small) and having a nice cup of coffee on a beautiful sunny morning.

WGG: Do you drink a little bit of coffee or a lot?

LG: I try to limit myself to 2 cups but I am one of those people where if it’s around, I will keep drinking it until my body is like, NO, STOP!

The interview derailed after that as we gushed about our common love of coffee and discussed future appearances for GingerlyMade (which can be found on Instagram @gingerlymade).

Fortunately, for us, we hit the a great section of artist alley when we met Leslie! All of her pieces reflect the individuality she was craving when she wanted to become an illustrator and we couldn’t be more thrilled to  now know and support her! 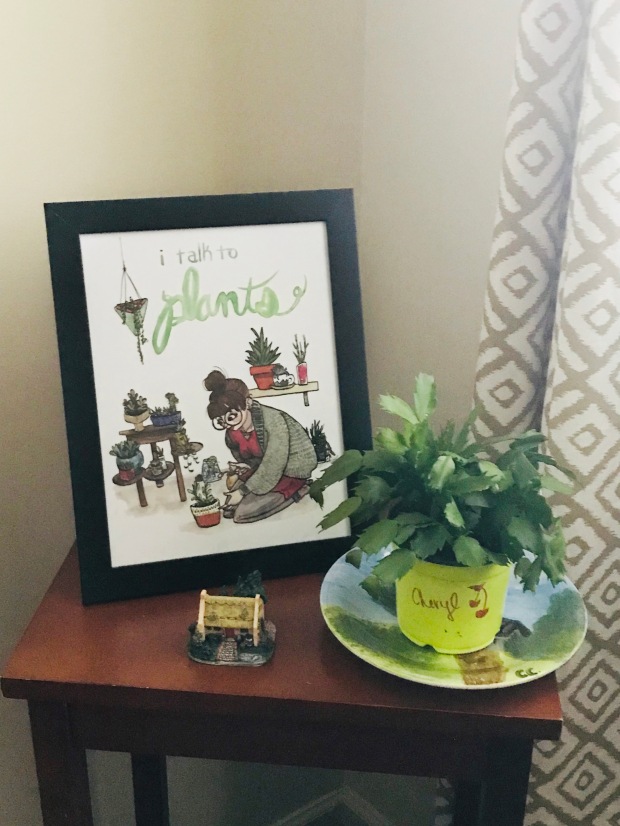 A photo of CC’s piece at her little Hobbit Hole

WE would like to thank Leslie for taking the time to entertain our many questions, embracing our (ok, only CC’s) awkwardness and giving a darn good hug! We hope you make HeroesCon a regular thing so that we can see you again soon!

And HeroesCon, thanks for being the kind of convention artists get excited to come to!

~Until next time, keep it weird 😉